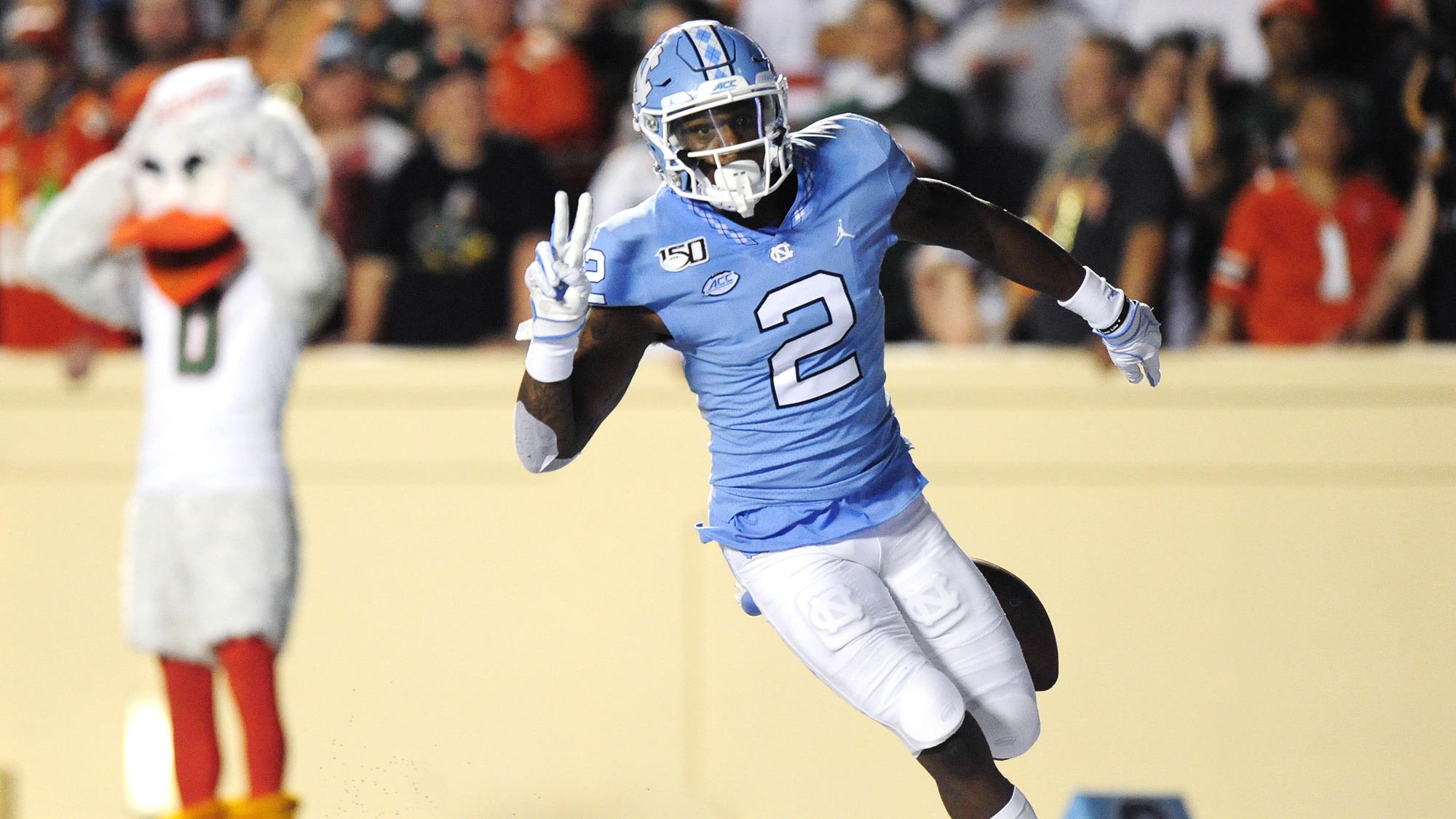 Finally, we’re at the end of the first round. I hope you’ve enjoyed this mock draft. If anyone has any suggestions on how to improve draft content, let us know. This is the tail end of the draft where the great teams make their picks. These teams all either went to their conference championship games or fell just short. Separated by a very small margin, these picks are going to be crucial. Think of it as a PML arms race. Which contender is going to come out of the first round with the best players? This is where we see if top coaches are also top general managers.

Joining his college teammate Dazz Newsome, the Patriots add some speed to their offense with this pick. Dynamic with the ball in his hands, he will allow this coaching staff to get creative with passing concepts. He may take a bit of work to become a fully-fledged wide receiver, but New England invests in their players as much as anyone. With the new addition of Matthew Stafford, they won’t have to worry about missed passes either. They’ll want to make the most of their recent trade, so expect to see this run-heavy offense shift into a bit more of an air raid, especially with the recent success the Bills have had.

The Patriots have a few tight ends on the roster already, but we have them going back to the well here as they have run multiple tight end sets well in the past. Jalen possesses amazing size for the position and has the best catch radius in this year’s draft. He will be able to make routine plays as well as the ones that will shock the crowd. He does not possess amazing burst off the line but builds long speed down the field. He doesn’t have the highest floor but his potential is off the charts. He has improved dramatically as an inline blocker and will excel on seam routes for the Patriots.

The Vikings have some solid players at cornerback but could always use more talent. Corners are a bit like pitchers in baseball– you can never have too many. This would also let them move pieces around to fill the void left by Harrison Smith at safety. They play in a division that runs the ball as much as anyone, but stopping the pass is always going to be key in big games. Being able to drop into dime or quarters packages on late downs and having good players all over the field is a huge advantage for a team to have, and Coach zStar knows how to build his team to his strengths. Even if cornerback isn’t the pick, I’m sure he will pick a player who winds up in the Pro Bowl. They were the NFC favorites to make the Super Bowl last year, so they are just a few pieces away from knocking off the Washington Football Team.

For many years the Vikings have had dominant front 7s, that many opponents feared. We have them going back to that here with the selection of Smith. Smith would be a much higher pick if he didn’t come with injury concerns. He is a hyper-athletic end who played wide receiver and tight end in high school. In college, he was asked to do one thing and one thing only, attack the quarterback and he does it well. His sack totals aren’t impressive in college as he routinely played in 5 man rotations and played injured often. He still generated a ton of pressure on opposing QB’s week in and out. He can bull rush or speed rush past a tackle in an instant. The Vikings may have found the next cornerstone to their dominant front seven.

The Raiders linebacker corps is pretty rough. Given how the sport is trending towards being a passing heavy game, it’s no surprise to see a run-stopping linebacker fall this late, no matter how good he is. Ranking 25th in the league in rushing yards allowed per game, the Raiders are in a very good position to pick a player to fill a need. He may not be the flashiest athlete, but he is going to get the job done.

The Raiders just picked up this draft pick from the Dallas Cowboys who were trying to move out of the first round all week. With no free safety on the roster currently, this pick must be a safety for the Raiders. We have them taking 6’3 safety Kyle Hamilton. He has outstanding ball tracking skills and natural hands, looks like a wide receiver while high pointing a ball. He is on the slender side but is still an impactful tackler. He can cover ground quickly with his long strides and will be an impact immediately at the backend of this defense. If he grows into his body more, he will be a scary hitter.

This Chargers team has made their identity very clear: they want to add speed first and figure out the rest second. Dotson ran the fastest 40-yard dash for all receivers at the Combine this year, making him the perfect fit for this offense. With Keenan Allen already one foot out of the door (there was a failed trade to ship him away today), the writing is on the wall. Paired with Rico Gafford, the Chargers are slowly building a track team in the city of angels.

The Chargers have been trying to move Keenan Allen all offseason, if they find a trade destination this might become a wide receiver. Until then we have them protecting the blind side of Justin Herbert for years to come. Walker is one of the more polished pass blockers in this year’s draft class. He has footwork many pros would be jealous of. Since being named the starter is has started every game, and the greatest ability sometimes is someone’s availability. The Chargers look to make another long run in the playoffs this year and having a top tackle will help.

Super Bowl runners up, it is clear that the Football Team doesn’t need to change much of anything to get back to where they finished and achieve even more. If I were them, I’d take the best player available that fills a need. McGrone is one of the highest-ranked linebackers in this class and could develop into a great player alongside Reuben Foster and Darron Lee. They had a near top ten defense in every statistic, and this pick just helps them get even stronger.

The Football team made an amazing run to the Super Bowl this past year and eventually fell to the Buffalo Bills. In that game, Josh Allen has a field day as he had a clean pocket to throw from. The Football team regularly got pressure on opposing QBs this season and will double down on that effort here with the selection of Rumph. He is a traditional pass rusher who uses his first step acceleration to blast right last tackles. His teammates joke with him his position is “on the field” he plays everywhere. They line him up all over the front seven and gives the football team flexibility here. He has graded out as the best pass rusher two years in a row in college.

Named after the Bills coach from the last cycle, Buffalo somehow finds a way to draft the best strong safety in the class to replace Jordan Poyer. Everything seems to be going right for them after winning the Super Bowl. This team has only gotten better, and they are starting to build a very scary team. Maybe they’ll fall back to Earth next season, but I wouldn’t bet on it. The Bills are here to stay. He isn’t a big hitter but the USC transfer is excellent in coverage and plays a very similar style to Poyer. The Bills aren’t rebuilding; they’re reloading.

The Buffalo Bills coming off a super bowl and a very busy free agency have little holes to fill. They have a complete team from top to bottom. Josh Allen played at an MVP level down the stretch, and throughout their playoff run. The easiest way to ensure that continues is to keep him upright. Daniel is a massive tackle at 6’9 400 lbs. He uses sheer strength to move people in the run game and can shift his hips quickly to slide out and protect the quarterback. He will dominate against any bull rush technique but can fall victim to elite speed rushers. The Bills will be able to ease him into the rotation which will be an ideal situation for Daniel.