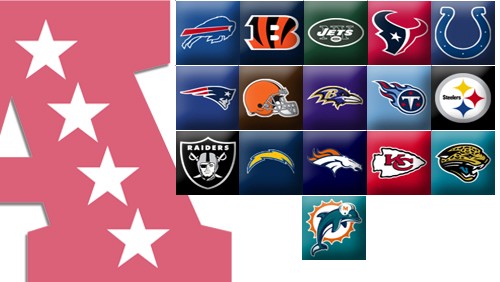 Four weeks of Premier Madden League football have come and gone. We are officially onto week 5 of the season and we are here to check who is leading each division and who is officially the bottom feeder of each division.

Leader: Buffalo Bills (4-0)  – The Bills thus far have had a great season as they are one of the few teams who haven’t suffered a loss this season. The Bills have solely focused on being a rush first offense as they lead the league in rushing yards per game. Their victories have come from rushing the football as well as cementing themselves as one of the best defenses in the league. We will see if they are truly studs in the next  four games as they play three teams who have each only suffered one loss.

Bottom: New England Patriots (1-4) – The Patriots started off week one on a bad note and continued trending down in all but one game this season. Their offense can’t keep up with how many points they give up per game as they are 27th in points per game scored versus 19th in points given up per game. Coach Wumbo will have to turn things around quickly as another loss or two could already take them out of the playoff race.

Leader: Los Vegas Raiders (4-0) – The Raiders have remained undefeated thanks to their scoring offense this season. They are the best in the league  with an outstanding 42 points per game. They have won every game thus far by more than a touchdown, with all but one game going over double digits. If they can keep up this style of offense, it will be very hard for anyone else to have a shot at the west.

Bottom: Los Angeles Chargers (2-2) Outside of a week one aberration, the Chargers have been in every game they’ve played this season. They could easily be 3-1 right now if a few things went their way. This division is one of the best so they will need to start winning these close games if they want to catch up to the Raiders.

Leader: Cincinnati Bengals (1-3) – Winner winner chicken dinner. The Bengals are winning the worst division in the Premier Madden League and it will most likely stay that way until the end. All four teams are still in the division race, but the Bengals have looked better and better each week. We expect them to hit their stride sooner rather than later and hit the 8/9 win mark by season’s end which will be good enough to win the division.

Bottom: Pittsburgh Steelers (0-4) – The Steelers have been blown out of every game except one this season. With a pitiful 18 points per game average, they will need to find some offense if they want any part of making the playoffs. They are lucky to be in this division as they are still in the playoff race, however, I can’t see them winning more than 4 games this season.

Leader: Indianapolis Colts (4-0) – The Colts are another undefeated team who no one has come close to beating. The week one win over the Seahawks is the closest on the scoreboard but let’s be real everyone knew who was going to win that game from the start. The only flaw on this Colts team has been their passing offense, however, they haven’t needed to pass the ball in most games. Their division is tough with all teams over .500 or better so they might have to lean on passing the ball. Time will tell if that becomes an issue, however, I have a hunch it won’t.

Bottom: Houston Texans (2-2) – One of the worst rated rosters in the league has surprised everyone this year. They have lost two games by a large margin, however, they are winning the games they should. Sitting superstar quarterback Watson could hurt the team in the long run, however, for now they have leaned on Mills and their defense to stay in the hunt for the division crown.

The Raiders, Bills, Colts, and  Bengals are all leading their division at the moment but anyone from the West,  and South, can easily take control of their division. The AFC wildcard spots are going to be up in the air until the last moment but I can see plenty of good quality teams missing out on the big dance. If the playoffs started today, teams like the Dolphins, Chargers, Texans, Broncos, and Jets would miss the playoffs. We will take another look at these standings at the halfway point of the season and see if any teams are still on top or  claw their way back from the bottom.