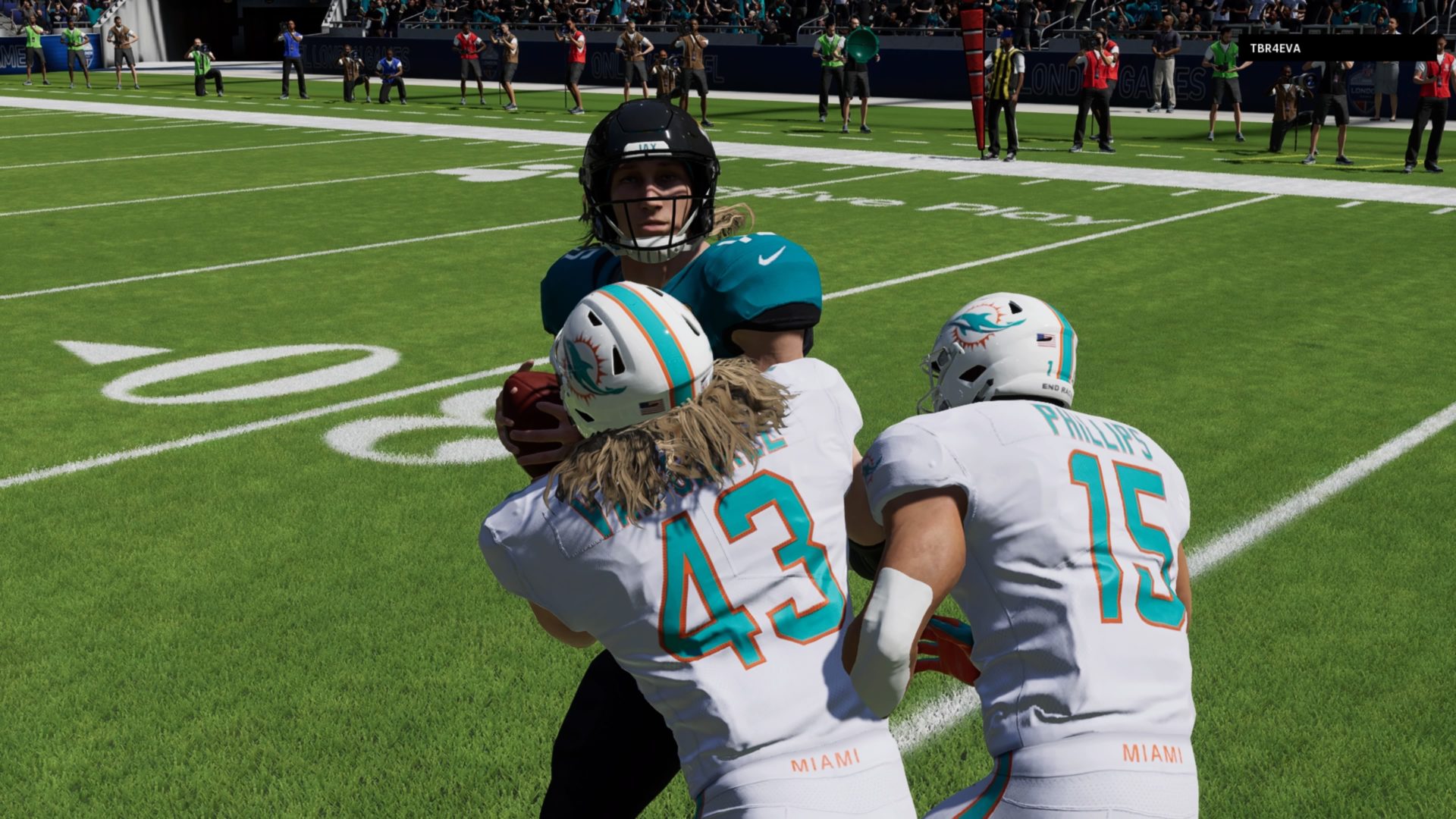 The Return of Jaylen Waddle!

Jaylen Waddles’ return from his foot injury has been highly anticipated since he left the game against the Bills on the first offensive play in week 2. The Dolphins came into this game against the Jacksonville Jaguars with the belief that their road to the playoffs begins here. Analysts from around the league gave the Dolphins very little chance to win, but the Dolphins were able to pull off a staggering 48-7 victory over the Jacksonville Jaguars. The Dolphins looked like a brand new team on offense and defense. The Dolphins scored the most points of the season this week, but the electric Jaylen Waddle didn’t disappoint in his first game back. It was uncertain whether coach Fallen was going to have Jaylen Waddle on a snap count or not, but the coach wanted to make sure Waddle felt comfortable running his routes in pregame warmups. Waddle expressed to his coach that he was ready to play and wanted to be on every offensive snap unless the game got out of control. Coach Fallen dialed up every opportunity for Jaylen Waddle to make an impact in the game and the connection between Tua and Waddle just before the half ended is what allowed the Dolphins to run away with the game.

The Dolphins were leading the Jaguars 17-7 and held the Jaguars to a punt near the end of the half. They were able to get the ball back with just under thirty seconds left and two timeouts in their back pocket. Salvon Ahmed was able to take two handoffs from the shotgun and rush to the 33 yard line of the Dolphins. Coach Fallen didn’t want to call a typical hail mary play but instead designed a play that would target the sidelines with two deep post routes crossing each other. The Jaguars called a prevent defensive play to try and keep the Dolphin receivers in front of them. Jaylen Waddle raced across the field on a post pattern, but when he realized that his quarterback couldn’t get the ball to the endzone, he raced back to the 40 yard line of the Jaguars and Tua found him in the middle of the field between three Jaguar defenders. Waddle was able to catch the ball and accelerate up field past the Jaguars defenders before they were even able to react. Jaylen Waddle ran into the endzone with 0 seconds left on the clock and the Dolphins went into halftime with a 24-7 lead. Jaylen Waddle finished the game with 6 receptions for 117 yards and 2 touchdowns. The Dolphins were able to remain balanced throughout the game and it helped their quarterback immensely. Tua had a perfect QBR(158.3) against the Jaguars, he completed 16 of 20 attempts for 343 yards and threw for 4 touchdowns. Salvon Ahmed hasn’t been able to break off a huge run yet this season, but he was able to rush for 76 yards on 21 attempts. He added a rushing touchdown to his rookie resume and caught 3 passes for 42 yards. Ahmed didn’t have an overwhelming performance, but he continues to be an outlet for Tua and has been one of the most consistent players on the offense all season long.

The Dolphins defense had their most impressive performance so far this season against the Jacksonville Jaguars. They were able to hold the Jaguar offense to 248 total yards. The number one overall selection in this year’s draft hasn’t been able to perform the way the Jaguars hoped that he would. Trevor Lawrence has thrown multiple interceptions in every game that he has played in this season. He has thrown more interceptions(16) than he has touchdowns(15) this season. The Dolphins defense was able to pick off Trevor Lawrence 5 times and sacked him 3 times. Xavien Howard led the Dolphins with 2 interceptions. Justin Coleman was able to return the interception that had for a touchdown, but outside linebacker Andrew Van Ginkel continues to be a dominant force for the Dolphins. Van Ginkel has 3 solo tackles, 1.5 sacks, and 1 interception. The Dolphins have been using Van Ginkel as a pass rusher more often than not after picking up rookie outside linebacker Jacoby Stevens from the Eagles’ practice squad. Jacoby Stevens has played in three games this season and has 3 solo tackles and 1 interception. His interception came in this game versus the Jaguars. Stevens is 6’1” and has 93 jumping. He has midrange speed with 87 hitpower. Stevens is 23 years old and the Dolphins love the potential that his linebacker has. Stevens has primarily played on special teams but is projected to play in the sub linebacker position in the Dolphins nickel and dime packages with Van Ginkel rushing from the edge. The Dolphins improve to 3-3 with this win over the Jaguars and it is a much needed win that will almost assuredly help their chances with playoff contention at the end of the season.

The Dolphins have now been able to string two wins together and are looking to string a third in a row when they host the Atlanta Falcons next week. The Falcons are at the top of their division with a 3-2 record and are coming off a bye week. It is expected that they will be very prepared for anything that coach Fallen has to throw at them. The Atlanta Falcons are a team that is at a crossroads. They have capable players on the offense, but is Matt Ryan the answer at QB? Matt Ryan’s throw power is extremely low when it comes to downfield passing. Kyle Pitts and Calvin Ridley give the Falcons options to keep the defense honest, but it has been Kyle Pitts leading the Falcons in receptions so far this season. The Falcons have a top five run defense statistically, but they are one of the worst so far this season when stopping the pass. The Dolphins specialize in passing the ball, so the Falcons are going to have to keep the Dolphins receivers from getting behind them if they have a shot in this game next week. The weather may also have an impact on this game. Weather experts have projected that there will be a steady downpour in the afternoon when the game is supposed to start. It’s possible the game could be delayed for thunderstorms, but if this match up is played in the rain, you’d have to think it will favor the Dolphins.