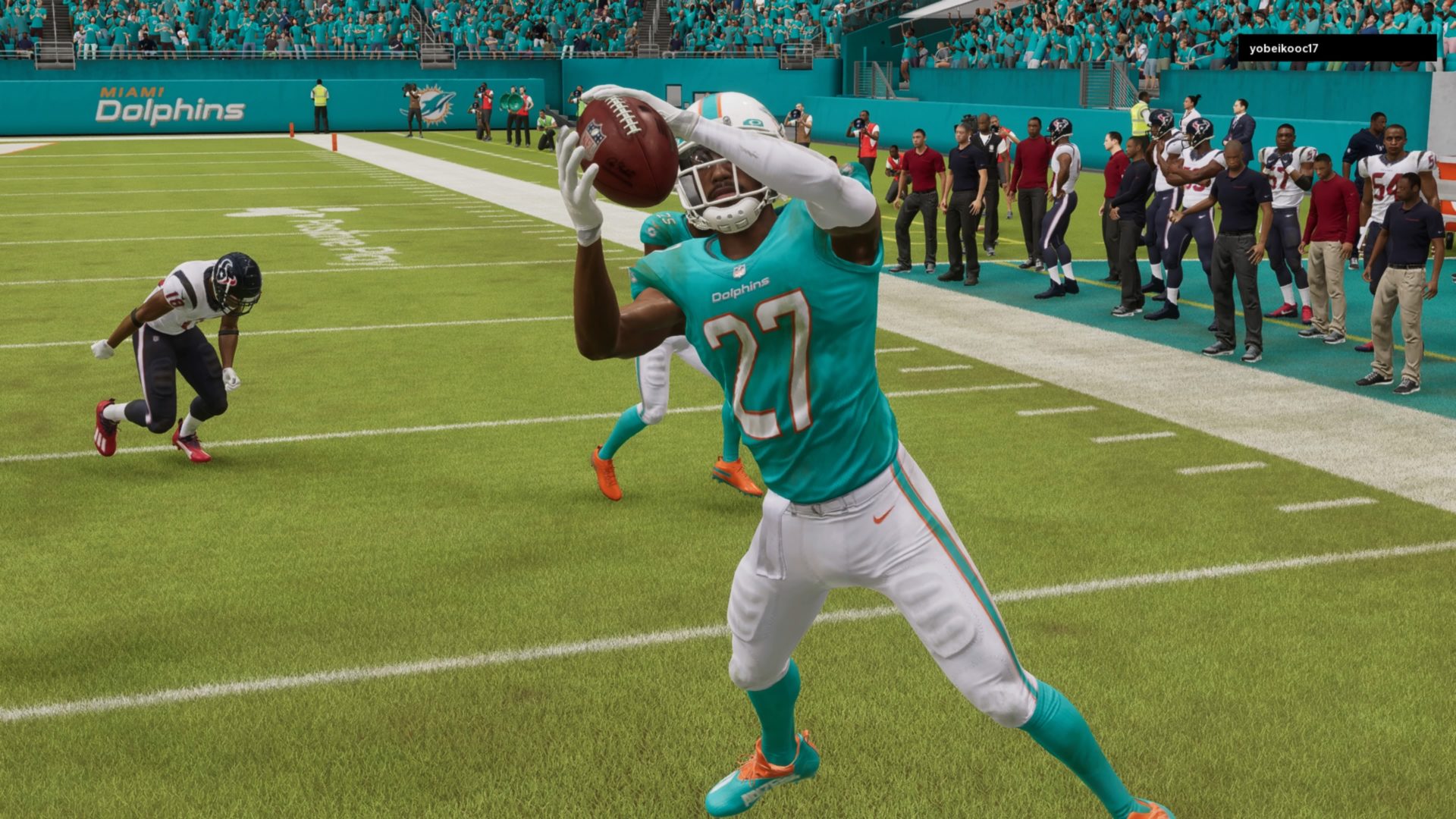 A Fall to Victory!

The Miami Dolphins upset the Houston Texans in a game that was wild from the very first snap. Salvon Ahmed took the hand off and ran straight ahead but ran into the back of his own lineman. He stumbled to the ground, rolled over, got up, broke the tackle of multiple Texan defenders, and ran the ball 75 yards for the touchdown. Our first next gen stat of the game informs us that Salvon Ahmed actually ran a rushing distance of 82.3 yards. The Dolphins were able to jump out to a quick 7-0 lead over the Texans and that allowed them to keep a balanced offense and minimize turnovers. The Dolphins were able to maintain a steady hold of the lead until after the second half when the Texans tied the game (13-13) deep into the third quarter. This was a defensive battle where both teams went for it on fourth down because they knew that maintaining possession of the ball was just as important as scoring points. Ultimately, the game came down to the fourth quarter where the Texans made too many mistakes. The Dolphins were able to win the turnover battle as they forced Davis Mills to throw 4 interceptions. Mills had thrown 7 interceptions in the first 8 games of the season, but the Texans were able to rattle him all game despite not being able to get a sack on the quarterback. The Dolphins were able to stay fresh throughout the game thanks to their home field advantage of having a slow fatigue factor and their fans rallied behind them the entire game.

Salvon Ahmed had his best game as a pro so far against the Houston Texans. He rushed 13 times for 132 yards. He averaged 10.2 yards per carry which doubles his season average of 4.8. Before this game, his longest run was for 25 yards, but he was finally able to break off a huge run of 75 yards in this game. Despite most of his yards coming on 1 carry, he still had multiple big chunk gains throughout the game. Ahmed also caught 9 passes for 118 yards. Ahmed was able to increase his development trait to Superstar and was given the ability of ‘Return Man.’ Coach Fallen stated after the game that he will not have his starting running back on kick returns, but he is open to the idea of Ahmed returning punts. Coach Fallen is concerned with his running backs ability to stay fresh, so if we do see Ahmed returning kicks, we will see more of Myles Gaskin going forward. Coach Fallen kept good on his promise of protecting the ball and maintaining balance throughout the game. This was the first game that Tua Tagovailoa didn’t throw a touchdown pass this season, but he didn’t have an interception either. Tua was precise with his passes and kept to the short to mid passing game. Coach Fallen rarely called up a deep passing play in this game, but Tua audibled Will Fuller on a 3rd and 1 to a streak late in the game when he noticed the defensive back covering Fuller pressing the line of scrimmage. Fuller beat his man off the line of scrimmage, but Tua overthrew his receiver which led to the Texans getting the ball back instead of securing the game at the moment with just over a minute left. The Dolphins defense were able to bail their quarterback out on the next drive which in fact ended the game.

Justin Coleman, Jevon Holland, and Byron Jones were all able to pick off Davis Mills. Justin Coleman came away with two interceptions and the interception that secured the victory for the Dolphins. Coleman primarily plays in dime packages and isn’t expected to be with the Dolphins after this season, but is it possible that if he plays this intensely moving forward, he could change the mind of the Dolphins ownership. We are halfway through the season and the Dolphins are sitting at 5-4. They are in the middle of the AFC and are tied for second place in their division. The Dolphins are performing well statistically. They are middle of the pack for total yards on both offense and defense. They are in the top 10 against the pass and in passing yards on offense, but the highlight of the team has been their defense’s ability to hold teams from scoring. Opposing teams are scoring an average of 23 points per game which ranks third in the league. Jevon Holland, Devin McCourty, and Xavien Howard all lead the team with 5 interceptions on the season. The biggest surprise for the team has been the emergence of outside linebacker Andrew Van Ginkel. He has 4 interceptions, 6.5 sacks, and 22 solo tackles. His 6.5 sacks has him tied with three other players for second most in the league. On offense, Salvon Ahmed leads the team in catches (62) but Ahmed (723) Fuller (721) and Waddle (608) are all close in receiving yards. Ahmed is by far the team’s offensive MVP, he has 646 rushing yards and 5 touchdowns to go along with his yards in the passing game. He is on pace to rush/receive for over 2000 yards this season. Ahmed was originally only signed for one season, so he is set for a huge payday at the end of the season. The Miami Dolphins are hoping to offer a deal to Ahmed before the season is up and it is our assumption that the team will make good on their offer. The Dolphins stay at home and host the Baltimore Ravens in next week’s game.

The Baltimore Ravens are under new management and hired a new head coach in week 5. Since the ownership change, the Ravens are 3-1. Their 3-5 record is one of the lowest records in the AFC, but they are just one game behind the Cleveland Browns and the Dolphins cannot underestimate them.