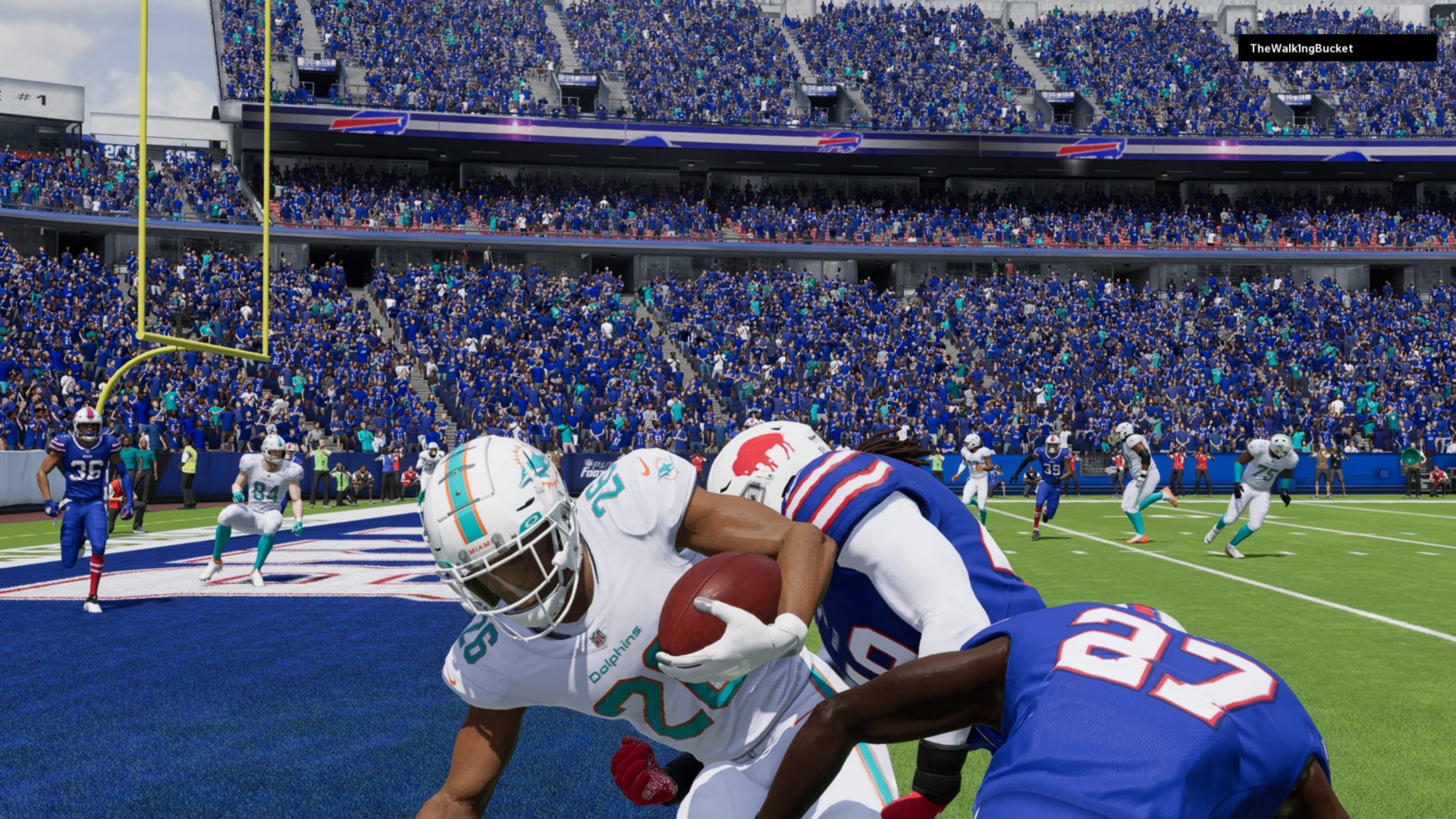 The Dolphins Offensive Line…Gives Up?

The Dolphins started the first four games of the season with a 1-3 record and were able to bounce back the last three weeks and pull off a string of victories. Heading into this week’s game against the Buffalo Bills, they were sitting at 4-3 and in prime position to take over the division lead. The Miami Dolphins won the coin toss and deferred to getting the ball after halftime, so Josh Allen and the Bills took the field first. However, two plays into their first drive, Josh Allen took a designed run to the left side of the field and in open space was laid out by rookie safety Jevon Holland. Josh Allen coughed the ball up on the hit and rookie cornerback Noah Igbinoghene recovered the fumble and ran it back for a touchdown. This was the first touchdown of the rookie’s career. Josh Allen was able to march his team down the field on the next possession and hit Matt Breida on a wheel route for a touchdown. The Miami Dolphins offense were able to put together a few plays to get them into the redzone, but on 2nd and 6, Tua threw a streak to tight end Hunter Long in the endzone, but it was intercepted by Jordan Poyer. The Miami Dolphins had all the momentum and a guaranteed three points but were too aggressive and this drive ultimately led to a 38-31 defeat.

A 7-0 lead for the Dolphins eventually led to a 21-7 lead for the Bills. The Miami Dolphins offensive line seemed to give up entirely on a 2nd and 10 designed pass play that allowed three Bills defenders free reign at Tua. Three of the five offensive linemen dove towards the ground and when Tua was sacked, the ball came out of his hands and the Bills were able to recover and get into scoring range. https://www.twitch.tv/fallen_2244/clip/NaiveCoweringChimpanzeeEagleEye-7RLi8oMmHREYILCA *Clip for reference!

The Bills largest lead of the game (28-7) had the Miami Dolphin fans in an uproar. The Dolphins were able to rally after that drive and had a chance to win the game, but too many mistakes were made and Coach Fallen said that the team’s aggressiveness on offense would be reevaluated and a more balanced approach would be in place for next week’s game against the Houston Texans.

Tua Tagoviloa attempted to pass the ball 40 times and completed 29 of those attempts. He threw for 373 yards, 2 touchdowns, and 3 interceptions. Salvon Ahmed only rushed 10 times for 46 yards. The Dolphins were behind the 8 ball early on and were forced to abandon the run game, but if they want to be successful against the great teams in the league, Coach Fallen is going to have to implement a balanced offensive approach. The Dolphins short passing game has supplemented a running game and Salvon Ahmed caught the ball 11 times for 92 yards and had 1 receiving touchdown. Aside from Ahmed, Jaylen Waddle continues his dominance after coming off of his injury. He had 9 receptions for 185 yards and 1 touchdown. In the four games that Waddle has played in, he is averaging 120 yards and 2 touchdowns a game. Will Fuller expressed concern that his absence from the game plan had him frustrated. Fuller was coming off a three game streak where he had over 100 yards in each game and at least one touchdown. Coach Fallen reassured Will Fuller that he was a crucial part of the offense and his number would be called again and his patience would be rewarded. The Dolphins are going to have to bounce back quickly because this is their fourth loss of the season and it is unlikely that they would make the playoffs if they lose more than two more games this season.

Coach Fallen wanted to address his offensive line after the game this week. In the two games that they played the Buffalo Bills this season, they have allowed five sacks against Tua Tagoviloa. They only allowed 9 total sacks in the other six games this season. Newly acquired right tackle Mitchell Schwartz allowed two sacks this game against the Bills. Mitchell Schwartz was questioned by the media after the game and he told them that he was experiencing nerves, but that’s no excuse for his play and he would do whatever it took to protect his quarterback. There is a lot of football still to be played this season and the Dolphins are in the middle of the pack, but Coach Fallen has to get this team better up front. Trading for Mitchell Schwartz was a step in the right direction, but the team has pieces, they just need to be coached up and developed. Schwartz was also brought in to be the anchor of the offensive line and his leadership cannot be trusted until he stops making mistakes. The Dolphins do not have their bye week until week 14, so Coach Fallen will have to develop the team through practice each week, but he will also have to keep their health and stamina in mind.

The Miami Dolphins welcome the Houston Texans in week 9 and Houston is coming off of a huge victory against the Los Angeles Rams. The Houston Texans have made a lot of changes to their team this season and the offense doesn’t look like what most people would think. They traded Deshaun Watson and rookie quarterback Davis Mills as the starter. Coach Fallen believes that his defense will be able to take advantage of Davis Mills this week. Despite the success that Mills has been having this season, he should expect a lot of pressure from the Dolphin front seven. Coach Fallen told media reporters this week that he wants to make the Texans work for every yard they gain. He wants his team pressed against the Texan receivers and plans to have his safeties work around the line of scrimmage in various disguised coverages to throw off Davis Mills. On paper, the Dolphins schedule gets easier over the next five weeks, but even though their opponents are at .500 or below, they shouldn’t take any team less seriously.