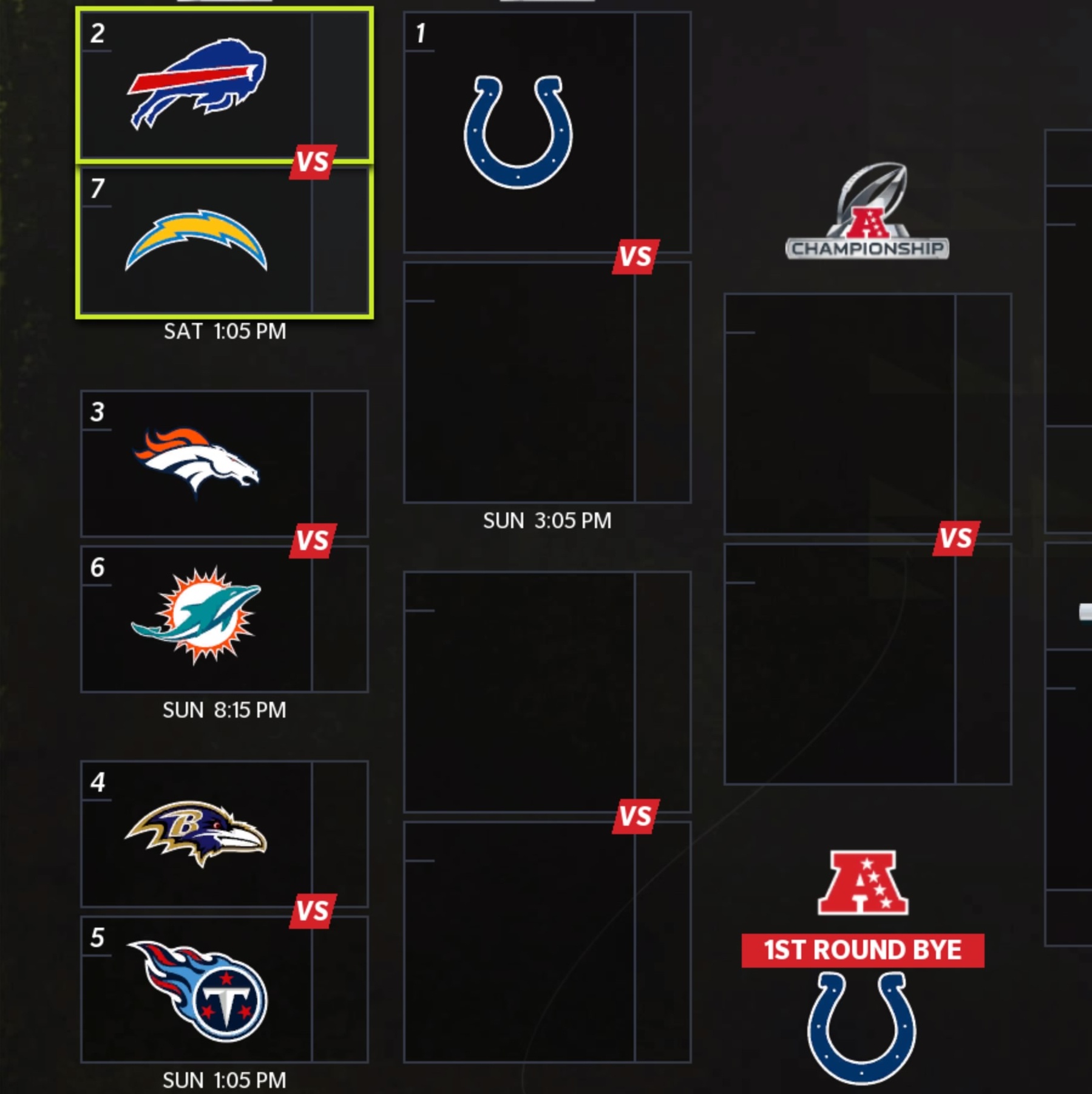 Fourteen weeks of Premier Madden League football have come and gone. We are officially onto week 15 of the season and we are here to check whether the same teams are still leading their divisions as well as if any team has dug themselves out of the bottom.

Leader: Buffalo Bills (10-4)  – The Bills still have a one game lead on Dolphins, and have looked good for most of the season. They have beaten the Dolphins twice, and hold the tiebreaker over them. The Bills have recently dropped a game versus the Tampa Bay Buccaneers, however, this was without Josh Allen. The Bills still have the surging Patriots left, however, their other two opponents are below .500. As long as Allen doesn’t get suspended anymore, it’s safe to say the Bills should win the division.

Bottom: New York Jets  (4-10) – From a 4-2 hopeful to 4-10 woeful, the Jets fans have had a full range of emotions this season. They looked good early in the season, however, this losing streak has them looking to play spoiler in their final games. They have the Jaguars, Buccaneers, and Bills left to play this season and each game is important to the opponent. All three teams are thick in the playoff hunt and will be licking their chops to play an opponent under .500. If the Jets can get even one win out of these three it will shake up the playoff race significantly.

Leader: Denver Broncos (9-4) – This division has had three different leaders at one point in this season. As of right now, the Broncos are a game ahead of the Los Angeles Chargers. The Broncos have been a high flying offense this season, and have handled their opponents in most games this season. The AFC West has all 4 teams over .500, however, the Broncos have handled every AFC West team except the Chargers. They will play all three divisional opponents in the last three weeks of the season. These three games will determine if they stay the leader or not.

Bottom: Kansas City Chiefs  (7-6) – From 5-1 to 7-6 is quite the downfall for a team that was considered to be a superbowl favorite at the beginning of the season. Even though they are the last place team in this division, they are still above .500 and still have a shot at the division. They still play the Chargers, Steelers, Bengals, Broncos this season. Winning all 4 of these games could give them the division with some help, however, winning all 4 games should at least give them a wildcard berth. They have already lost to the Broncos and Chargers this season, so they will need to show that they can beat these teams if they want their season to end in success.

Leader: Baltimore Ravens (8-5) – The Ravens have been surging ever since their first loss of the season. The team has gone from 0-5 to 8-5 in one of the best turnarounds this season. The previous owner was 0-4, however, this owner lost his first game only to win every single other one. They are looking like the powerhouse team that everyone knew the Ravens franchise could be. They have no resistance from any team in their division, and barring a complete 180, they will win this division easily.

Bottom: Pittsburgh Steelers (1-12) – The Steelers are arguably the worst team in the league and their record proves this. Even with their bad record, they had a shot at the division, until the Ravens surge began. They are strictly playing for their draft position, as a spoiler for the rest of the season. They came close to a win against the Minnesota Vikings, however, instead of taking the win they decided to let the game be simmed…They have three teams in the playoff hunt left this season to play and all three will be looking at them as an easy win. The Steelers can change this narrative with a win against any of these teams.

Leader: Indianapolis Colts (13-0) –  The Colts have officially wrapped up their division and have a legitimate shot at going 17-0. If the Colts play all their starters, it will be tough for any team to stop them as no one has so far this season. On the other hand, the Colts may rest their starters, protecting them from any injuries. They play three teams, the Jaguars, Raiders, and Patriots who hope they do rest their starters as all three teams need to win out in order to have a shot at the playoffs.

Bottom: Houston Texans (7-7) – The Texans have played well this season considering their roster and who their quarterback is. The fact  that they are even at .500  with this team in this division is a real testament to their skill. They currently aren’t out of the playoffs, however, one more loss will most likely take them out. They face two of the  three teams in the wildcard. Wins over both of them as well as a win versus the 49ers could propel them into the playoffs with some help.

The Chargers, Dolphins, and Titans currently hold the wildcard spots. The Dolphins at  9-5 face two teams less than .500, however, all three teams wont go down easily. All three teams are either in the playoffs or in the hunt. If the Dolphins maintain their spot it will be well deserved. The Chargers play four teams at .500 or above who are all fighting for a wildcard spot. They have a two game lead, however, that can dissipate easily if they don’t win out. The Chargers, out of the three, clearly have the hardest remaining schedule. The Titans face two teams above .500 or better. Statistically, the Titans and Dolphins have the easiest path to the Wildcard, however with 9 teams still in contention, anything can happen.